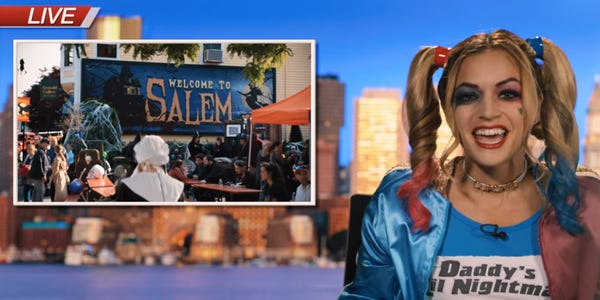 Get ready for a story that's as strange and puzzling as the plot of an Adam Sandler movie.

The news anchor, who stars in Sandler's latest movie, "Hubie Halloween," is in fact a real Boston anchor. And turns out, she was fired from her job for starring in the Netflix comedy.

Alaina Pinto — who has a very brief cameo in the movie as the "Wake Up Boston Morning News" anchor, who dressed up as Harley Quinn to celebrate Halloween — is an anchor at Boston's WHDH 7News.

But on Thursday, Pinto took to social media and announced that she was "let go from 7 News" because she starred in the movie.

"I want to be open and honest with all of you," Pinto wrote in a statement shared to Instagram. "Last year, I participated in a cameo in the recently released Netflix movie by Adam Sandler, 'Hubie Halloween.' In doing so, I mistakenly violated my contract with the station and I understand why management unfortunately chose to terminate me. I am deeply disappointed and saddened, and I hoped this would not be how things evolved."

In the movie, Pinto plays an anchor who does a story about Salem, Massachusetts being the unofficial capital of Halloween in the US, leading to a report from Salem of all the fun events set to take place during the holiday.

Also throughout is a running joke of how Pinto's news anchor, the weather woman, and the reporter in Salem all decided to dress up as Harley Quinn for the spooky holiday.

There are still so many questions on why a small cameo in a Sandler movie led to Pinto losing her job.

Was it the comedic material? Did she not tell her boss that she would be in the movie? Do the bosses at Boston's WHDH 7News really hate Adam Sandler movies to this level?

Insider contacted both Pinto and WHDH 7News for comment, but did not get responses.