Tony Neal, the counsel assisting the hotel quarantine inquiry, wanted us all to be clear: the 25 days of hearings into the botched program and 290,000 pages of evidence did not show us an example of "bad faith or corruption" in Victoria's governance.

On the contrary, everyone had done their best, he said. 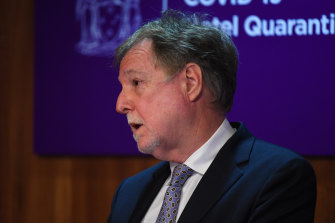 But that was almost the only good thing he and his two junior barristers had to say all day. Rarely can there have been such a measured but comprehensive demolition of public policy in this state than was contained in the final submissions of counsel assisting the inquiry on Monday.

The headline is the sheer level of death and illness this program undoubtedly caused. Behind that, virtually every decision made by a public servant contributed to a cascade of errors and unnecessary risks.

The problems started right at the inception: one of the counsel assisting, Rachel Ellyard suggested that the whole program was based on "thin" evidence that home quarantine was failing as a policy.

And on that thin thread hung a decision that forcibly detained thousands of people under the draconian provisions of the Public Health and Wellbeing Act. We put them in claustrophobic, sometimes dirty environments where they were given inadequate healthcare, inadequate mental health support, guarded by poorly-trained staff and where they were actually exposed to risk.

The infamous untraced decision to appoint private security to guard hotel quarantine was part of this.

But even more crucial, in some ways – the program's original sin – was the fact that it was conceived and executed as a logistical exercise, not a health exercise.

Flowing from that was what counsel assisting say was a grossly inadequate emphasis on the health and welfare of the people the state had detained.

The Chief Health Officer – or someone with similar seniority – should have been running it, they said. Everybody who touched it, particularly guards and hotel staff, should have been given adequate PPE and repeated training in how to use it. They were not.

Inside the rooms, the welfare of detainees – mental and physical – should have been the number one priority, not preventing their escape. Counsel assisting relayed stories of people with medical conditions being viewed as troublemakers. One woman with mental health issues was sent to hospital then back to their hotel room. Twice.

Sitting above all this were three government departments, Jobs, Health and Premier and Cabinet with unclear lines of authority. The department secretaries were, according to counsel assisting, failing to adequately brief their ministers at crucial times.

A couple of things potentially flow from this. If Victoria is ever confident enough in itself to reopen to international arrivals, which would mean imposing some form of quarantine, it's likely that it will need to think harder about invoking detention provisions.

Counsel assisting floated the idea of a "hybrid" system of initial triage in a hotel and then home quarantine for those able to do it. The legitimacy of any future hotel detention program must surely now be in doubt.

The second consequence is for the reputations of three of Victoria's most senior and respected public servants, Chris Eccles, Kym Peake and Simon Phemister, who are alleged to have left their ministers uninformed.

No doubt the responses from the government's phalanx of lawyers will be robust in their defence on that point next week. But when all this shakes out, perhaps Jenny Mikakos will not be the only senior player to pay with her job.

Most Viewed in Politics