Scomo is out, but Albo is in. And so is Jacinda Ardern. If the Art Gallery of NSW were not a steadfastly apolitical institution, one might imagine there is some comment intended in the selection of finalists for the 2020 Archibald Prize. In olden days a portrait of the prime minister would almost certainly be an automatic inclusion, but not any more.

Ross Townsend’s photo-realistic likeness of the prime minister in a suit and tie was turfed, while James Powditch’s unconventional image of the opposition leader, as a shadowy figure in a T-shirt, made the cut. John Ward Knox’s small portrait of New Zealand Prime Minister Jacinda Ardern is painted on silk and appears as a double image when one walks past. The most generous interpretation is that the trustees of the AGNSW, who select the exhibition and the winner, were looking for more innovative works. 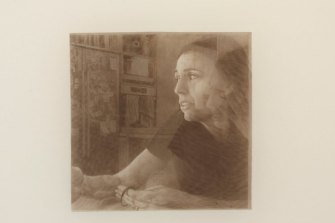 The only Liberal politician who made it to the gallery wall is the NSW Minister for Environment and Energy Matt Kean who has a reputation as a maverick within the party – not just for his turbulent private life, but for breaking with the federal government’s line that climate change had little to do with the bushfires. This must be the reason why Charles Mouyat has depicted the Minister holding a flaming waratah. The silvery jumpsuit is presumably fire-proof.

None of these pictures could be classed as a serious contender for an Archibald that is being held in the shadow of COVID-19 and Black Lives Matter protests. Almost every year the prize is the gallery’s most popular event and biggest money-spinner, but the pandemic presents a new set of challenges. Will this year’s show achieve the attendances of previous years? If the masses do roll up, how many viewers can be allowed in at any one time? We may be looking at a financial lifeline and a potential health hazard. 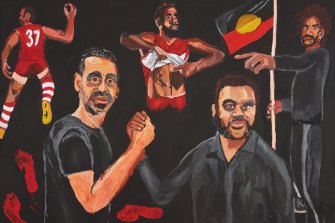 The global debates about race and ethnicity are reflected in the prominence given to Indigenous artists in this year’s prize. The Archibald has been restored to the central gallery, and some of the best spots allotted to artists such as Blak Douglas (AKA. Adam Hill), Vincent Namatjira, Tiger Yaltangki and Kaylene Whiskey. Elsewhere in the show, Craig Ruddy has painted Indigenous historian, Bruce Pascoe; Julie Fragar has captured artist, Richard Bell, and Charlene Carrington has portrayed her dad, Churchill Cann, in classic Kimberley ochres.

I’m hesitant to take a punt, partly because I don’t want to spoil anyone’s chances by making a public prediction, but Vincent Namatjira must be favoured, somewhat because he should have won two years ago. His Stand Strong For Who You Are, is a double portrait, featuring the artist himself alongside footballer, Adam Goodes. It may sound like a manifesto but the work has an off-beat charm that is very seductive in this company.

If the Trustees are not hell-bent on an Indigenous winner they might still score some political kudos by awarding the prize to Angus McDonald, for an excellent, albeit very straight, portrait of refugee writer, Behrouz Boochani. If they were feeling light-hearted, it’s hard to go past Richard Lewers’ portrait of arts patron Elizabeth Laverty or Wendy Sharpe’s Magda Szubanski, with the netball uniform but without her friend Kim.

One thing that hasn’t changed this year is the familiar routine of the Packing Room Prize, which is traditionally awarded to a good sort or good bloke. This year it was the blokes’ turn. The winner, announced on Thursday, was Meyne Wyatt, for a self-portrait with one eyebrow raised in the manner of a Bond villain. As an Indigenous artist and actor, Wyatt has the jump on history, as he is now the first Indigenous Australian to win any of the prizes associated with the Archibald. He would, however, be very long odds to take out the big one – not because he’s Indigenous, but because he’s won the Packing Room Prize.

Most Viewed in Culture

Related posts:
Recent Posts
CELEBRITIES News
What you should know about Amy Coney Barrett
Prince William Enjoys Outdoor Movie Screening with Sir David Attenborough to Watch His Latest Film
Frankie Muniz’s Wife Paige Price Is Pregnant, Expecting First Child Together!
Justin Bieber May Have Ended a 10-Year-Plus Friendship Over a Non-Apologetic Trump Instagram Post
This website uses cookies to improve your user experience and to provide you with advertisements that are relevant to your interests. By continuing to browse the site you are agreeing to our use of cookies.Ok