The first time Tegan Philip was in the grand final she was the shaky-legged newcomer. The second time she was the game's MVP.

Philip will run out with the Melbourne Vixens for her third decider in Sunday's Super Netball grand final and she will do so as a 11-season veteran playing in her last elite game. 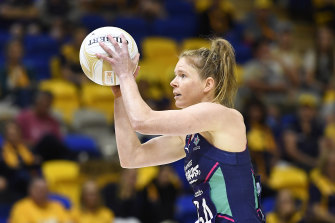 "There will be some nerves, there always are, but it’s about embracing those nerves," Philip said.

"You acknowledge it's a big game but I have my focus points that I focus on every game and that's what I'll be doing."

The Vixens go in with a three-pronged attack which sees Caitlin Thwaites, Mwai Kumwenda and Philip rotating between the two shooting roles as rolling substitutions were introduced this season.

All three have adapted to the change in tempo from past years where two starters would rarely change.

Melbourne's attack is the polar opposite to the Fever who will hone in on towering Jamaican shooter Jhaniele Fowler who has scored a league-best 910 goals this season, with Queensland Firebirds' Romelda Aiken the next best with 583.

"It's been different but I think it’s been an asset," Philip said. "We have been able to use the substitution rule well and our midcourters haven't found it too different."

Thwaites will join Philip in retiring and the pair have been roommates throughout the Vixens' 14 weeks in Queensland.

Philip insists retirement isn't infectious, just that the pair are both ready to move on.

"It was nice to have someone in a similar position and going through similar things," she said. "It's going to be weird but I'm excited for life after netball and not having netball dictate what I do."

"When they made the announcement in the week leading into the semi-final it was a really positive experience," McKinnis said.

"They are comfortable with their decision and just want to enjoy their last weeks. Everyone's focus is the grand final. If we can play our best netball beside each other that's the best thing we can do for them before they finish."

Philip has filled her time at the team's base in Brisbane by completing her teaching studies with only a four-week placement to come when she gets home.

"A couple of our fans have asked 'can you come teach at my school?'" Philip said with a laugh.

"You need to find time away from netball. I've been going down to the Gold Coast once a week for a swim and time by myself. I've also kept in contact with friends and family back home."

Sunday's grand final is expected to be a high-pressure affair given the two sides drew 63-63 in their last meeting.

Philip's family, husband and friends will be watching her final game back in Geelong, something they would have never dreamed of missing.

The Vixens had over 9000 fans at their 2014 grand final at Melbourne Arena while Sunday's crowd could well be filled with neutral supporters.

"It’s just different not being able to play in front of our home crowd," Philip said. "For my family and friends who can't be at my last game, I just put that down to 2020, that's just what happens.

"I want to take a moment at some point and appreciate the career I've had but I'll very much be all business and have my head in the game."

Most Viewed in Sport

Related posts:
Recent Posts
CELEBRITIES News
Scarlett Johansson & Colin Jost May Have Sent Out Handwritten Save the Dates ‘To Save Money’
Vanessa Hudgens’s Scariest Halloween Memory Is Actually Chilling
Jamie Lynn Spears: Britney Is ‘Trying’ to ‘Stay Positive’ During Quarantine
Lady Gaga Wears Her Iconic Outfits Again for New Voting PSA – Watch Now!
This website uses cookies to improve your user experience and to provide you with advertisements that are relevant to your interests. By continuing to browse the site you are agreeing to our use of cookies.Ok