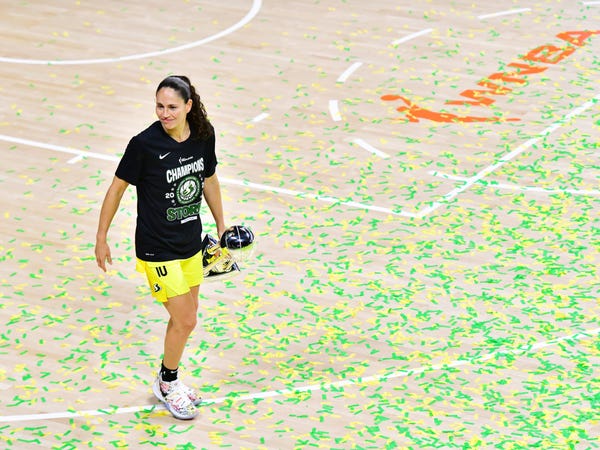 Earlier in her career, Sue Bird was pretty concerned about her legacy.

But now? The four-time WNBA champion and legendary Seattle Storm point guard is just happy to be here.

In an interview with NBA sharpshooter JJ Redick and Tommy Alter on "The Old Man and the Three" podcast, Bird said she's playing "on borrowed time" and sees every accolade that has come late in her career as something of a bonus.

"Three, four years ago I definitely had interviews where I was like 'I wanna leave a legacy,'" Bird said. "But now I'm at this point where like, they only really ask you that question if you've already done it. People are going to ask you about your legacy because you've already probably done something, so it's already written. It's taken care of."

Bird is widely considered one of the greatest floor generals in the history of the WNBA. The 11-time WNBA All-Star and five-time WNBA First Team honoree became the league's all-time assists leader in 2017.

She's won two championships since then, and made great contributions to her teams in doing so. Most recently, she helped the Storm to its fourth WNBA championship as a franchise, averaging 9.5 points and 9.2 assists per game through the playoffs in the league's bubble in Bradenton, Florida. And in the first game of the 2020 WNBA Finals, Bird set the league's single-game playoffs and finals record with 16 assists against the Las Vegas Aces.

"I'm on borrowed time. I literally shouldn't be here," Bird said. "These last two championships, especially this one, though, I'm just like 'Cool! Add it to the list!' but it wasn't going to make or break me."

Plenty of people have taken it upon themselves to compare the four-time Olympic gold medalist's career with that of LeBron James, as both basketball icons have continued to excel in their 17th season in the pros. The Los Angeles Lakers superstar himself even lauded Bird for her record-breaking Game 1 performance and encouraged her to "keep going" on his own Instagram.

But Bird insists that "it's different" when it comes to year number 17 and championship number four between her and James.

"A lot of people have been putting me and LeBron in the same picture on Instagram or putting us together," Bird said. "I do think it's different. He had this whole revenge thing — I feel like I'm on borrowed time. I'm about to be 40. It technically is both of our 17th seasons but it's actually my 19th, I just was injured two of the seasons — semantics. My point is I've almost been in this for 20 years."

Still, when healthy, Bird has been remarkably effective on the floor despite her age. She shot a career-best 49.4% from the floor and shot threes at a record 46.9% clip this season en route to becoming the first WNBA player and one of just three individuals to win WNBA or NBA championships in three different decades.

She has no plans to hang up her sneakers just yet. Immediately after the Storm won the 2020 WNBA title, Bird told members of the press that she's "cautiously optimistic" that she'll still be playing come 2021.

"Listen, the way I feel right now, if I can go through my off-season and continue to build on that in a good way, I don't see why I won't be playing next summer," Bird said. "I'm not trying to be like elusive but as I've always said, things happen. That's what the last two years have taught me. Anything can happen."