One of I Love Lucy actor Keith Thibodeaux’s favorite episodes of the show was “Lucy Meets Superman.”

Thibodeaux, who portrayed Little Ricky in the show, was mesmerized by actor George Reeves in the role of the superhero — to the point that the young actor really thought that Reeves was Superman.

Actor George Reeves launched his film career with a small part in the Oscar-winning Civil War film Gone With The Wind.

The role Reeves came to be associated with most, however, was that of superhero Superman in the television action series, Adventures of Superman, that ran from 1952 to 1958.

He accepted the role of the flying crime fighter as he was not being offered more challenging parts. Soon, the series became an enormous hit with children. Although it gave him satisfaction to see the show do well, for Reeves, who died in 1959, it was a reminder of how he felt his career was declining.

In the episode, Lucy tried to outdo her friend Carolyn Appleby’s plans for her young son’s birthday party. She begs her husband Ricky, played by her real-life husband Desi Arnaz, to try to secure George Reeves to come in his Superman costume to their son Little Ricky’s birthday party.

In the storyline, Reeves is unable to make it and so Lucy naturally takes matters into her own hands. She throws together a Superman costume of her own and sits out in the pouring rain on her window ledge for the cue from her best friend and landlady, Ethel Mertz, for when she can surprise the children as Superman.

However, unknown to her, Reeves’ plans changed and he shows up to not disappoint the children. In the end, after rescuing Lucy from the window ledge and learning the Ricardos have been married 15 years, Reeves tells Ricky, “And they call me Superman!” 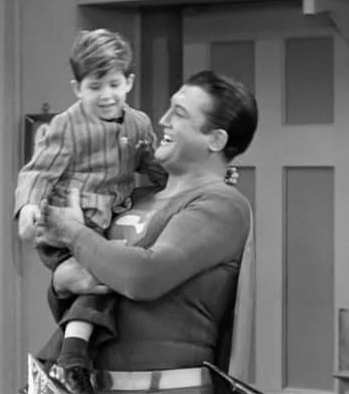 Thibodeaux told the Archive of American Television in 2005 about “Lucy Meets Superman,” his favorite episode of the classic comedy.

“That was probably my personal favorite because George Reeves was my personal hero,” he said. “And here he was coming, on my birthday on the show, and I got to meet him.”

The actor recalled his conflicted emotions in meeting Reeves. On the one hand, he knew Reeves was acting just as he was. But on the other hand, he was Superman.

“When I met him off the set, off camera, he shook hands with me and he’s this big, huge guy,” Thibodeaux said.

Even in recalling his meeting with Reeves, the actor seemed just as awestruck as he had been at age 7.

Related posts:
Recent Posts
CELEBRITIES News
Big Brother: All Stars’ Christmas Abbott and Memphis Garrett Are Dating
Robert Irwin Celebrates 17th B-Day With an Emotional Video of His Dad
Justin Bieber A Dad? Singer Explains Family Plans With Hailey Bieber
Justin Bieber Reveals How Many Kids He Wants To Have
This website uses cookies to improve your user experience and to provide you with advertisements that are relevant to your interests. By continuing to browse the site you are agreeing to our use of cookies.Ok