Matt, 46, was on hand to host another episode of Saturday Kitchen, joined in the studio by professional chef Theo Randall and radio presenter Sara Cox, 45. As usual, the presenter was cooking up a storm in the kitchen as he showed viewers watching at home how to perfect some of his best-loved recipes. However, when BBC bosses told him to stop so they could get a better camera angle on what he was doing, the chef point blank refused to halt proceedings.

The culinary genius was tasked was cooking a salmon dish with a such which was made with lots of butter and English sparkling wine.

As well as concentrating on his creation, the presenter was also trying to speak to his guests in the kitchen and listening to his editors speaking in his ear.

It eventually got to the part where the host needed to tell viewers to add butter to the shallots which had been cooking since he started preparation.

Matt tilted the saucepan to an angle so the camera could capture what the contents of the saucepan already looked like.

He then dropped in a handful of butter cubes, turned off the heat and began moving the pan in a circular motion to bring the ingredients together. 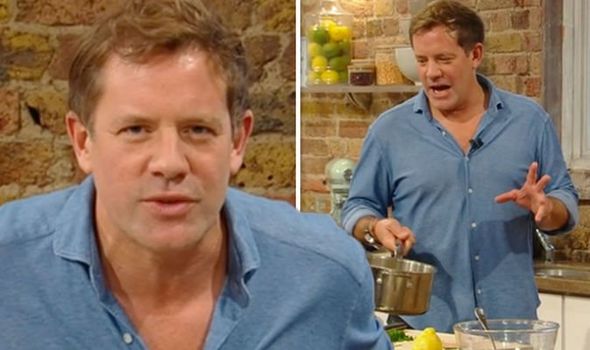 Unfortunately, for those watching at home, they couldn’t completely see what the contents of the saucepan now looked like.

“The director is telling me to keep still…I can’t,” Matt said as he defied his bosses, adding: “Jon, it will split.”

The entire studio burst into hysterics as the chef explained it was an “integral part of the recipe” so he couldn’t halt proceedings.

However, the culinary genius continued with the rest of the dish and by the end of the demonstration, the plate of food looked good enough to eat.